The conflict in Sri Lanka that spanned a quarter century finally ended in May 2009. The number of internally displaced persons (IDPs) increased after January 2009, reaching over 280,000 at one point. Some public facilities and economic infrastructures became obsolete or were abandoned because of the long conflict. In addition, demining was yet to be completed, thereby posing an obstacle to resettlement in the former High Security Zone controlled by the Sri Lankan Forces within Jaffna.

At the beginning of the project, however, as the efforts of the government of Sri Lanka to facilitate the return of IDPs intensified, the approximate number of IDPs remaining in welfare centers declined considerably. Security measures and other controls such as fishing restrictions were also being relaxed. People’s life in Jaffna has been gradually improving except in some specific areas. The Jaffna District has been the financial and socioeconomic center of the Northern Province, with more than half the population of the province living in Jaffna. Thus, the reconstruction and development of the Jaffna District would help raise the socioeconomic status of the rest of the Northern Province as well.

The project was intended to attain two objectives. The first was to assist in rebuilding socio-economic activity by formulating a regional development plan and road maps, and by implementing the Quick Impact Pilot Project (QIPP) and other similar projects. The second objective was to indicate a way to reconstruct the regional economy by, among other things, strengthening various community-based organizations such as the farmers’ organizations, fishermen’s cooperative societies, and women’s organizations, as well as reintegrating IDPs and other extremely vulnerable individuals into society.

The project was implemented by the joint venture formed by IC Net Limited and OC Global. OC Global was responsible for the QIPP including rehabilitation of agricultural and fishery infrastructure, and overall peacebuilding needs and impact assessment of the project. 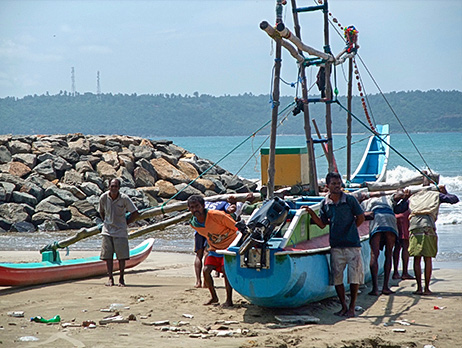 By ensuring responsive, inclusive, participatory and representative decision-making at all levels, development-oriented policies can be promoted in the area to reubild stronger.

“I hope that the donor community will come forward with support aligned with Sri Lanka's requirements and act strategically once the plan is translated into action,”