Since greenhouse gas (GHG) emissions from developing countries account for about half of the global total, controlling the level of GHGs in the atmosphere will not be accomplished without effective mitigation actions in these countries. Therefore, the United Nations Framework Convention on Climate Change (UNFCCC) stipulates that developing countries take measures to minimize the adverse effects of climate change.

The Republic of Serbia ratified the UNFCCC as a successor state of the Federal Republic of Yugoslavia, ratifying the Kyoto Protocol to tackle global warming in October 2007. Formulation of the Nationally Appropriate Mitigation Actions (NAMAs) is an immediate priority in Serbia and other developing countries. However, Serbia faces barriers to the formulation of NAMAs, such as the lack of human resources who have sufficient skills and experience to develop and formulate effective NAMAs.

The main objective of the project was to enhance the capacity of the staff and organization of the Ministry of Energy, Development and Environmental Protection (MEDEP) and NAMA-related agencies in Serbia so that they would be able to formulate and promote NAMAs in an efficient and effective manner. The project consisted of the following four outputs:

The counterparts from the Climate Change Division of MEDEP and other NAMA-related agencies conducted all the activities in the project. We established a working group and conducted technology transfer through a series of meetings. OC Global provided technical assistance to the counterparts and working group member institutions as part of the JICA Expert Team. 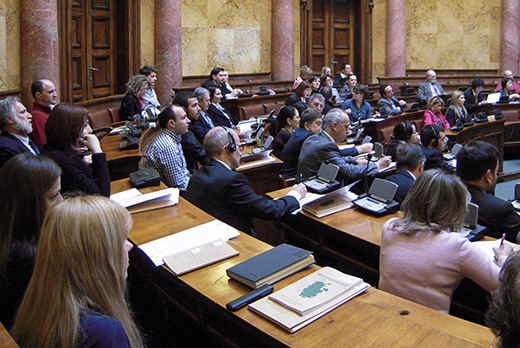 Information on climate change mitigation measures in Serbia that can become NAMAs was collected and a long list of 69 NAMA candidates was developed. After evaluation of the list, the NAMA shortlist was developed.

After further evaluation, 16 projects were selected as pilot NAMAs, such as rehabilitation of a thermal power plant, development of small-scale hydropower plants, and energy saving modifications of buildings. The total amount of potential greenhouse gas emissions reduction was 6 million tons CO2e per year.

To globally disseminate information on the project and Serbian NAMAs, a seminar was held on the sidelines of COP 17, which took place in November and December 2011 in Durban, South Africa.

To enhance recognition and understanding on NAMAs among Serbian stakeholders, a national NAMA seminar was held in Belgrade on February 6, 2012. On February 4-5, 2013, the second national NAMA seminar in Belgrade was expanded and conducted as the Balkan Regional NAMA Seminar in which officers from NAMA-related ministries in four neighboring countries (Albania, Bosnia and Herzegovina, Macedonia, and Montenegro) were invited.

Through technical assistance with JICA, we helped Serbia formulate national policies for climate change mitigation. Pilot projects were selected to promote the use of clean energy sources and make more efficient energy consumption in the nation.

“The EU will continue supporting Serbia – on climate and energy as well as in other fields,”