The handing over ceremony for the Marabut Municipal Hall was held in Marabut, Samar, Philippines on 7 June 2018. The Hall was built through the “Rehabilitation and Recovery from Typhoon Yolanda” Project, where Oriental Consultants Global (Head Office: Shinjuku, Tokyo, President: Eiji Yonezawa) had been engaged. Ms. Elizabeth Ortillo, Marabut Mayor, Mr. Shintaro Ichiki, Second Secretory of the Embassy of Japan in the Philippines, and Mr. Yoshio Wada, JICA Philippines Chief Representative, attended the ceremony. At the ceremony, a Certificate of Appreciation was awarded to Mr. Kazuhiro Miyatake, Senior Project Manager of Architecture Department and Mr. Yuji Asano, Chief Representative of OC Global Manila Office by Mayor Ortillo.

Typhoon Yolanda, which had the highest wind speed on record: 87.5m/s, hit the Philippines on 8 November 2013. It extended damage to many cities and towns over a wide area, destroying 90% of the houses in some of those cities and towns. OC Global undertook the formulation of the rehabilitation and recovery plans and design of the facilities. The Marabut Municipal Hall was reconstructed through Japanese Grant Aid, as a part of the Project, and delivered it to the city after completion. 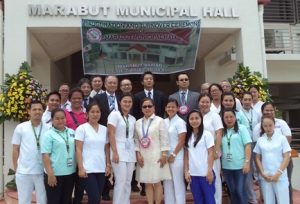 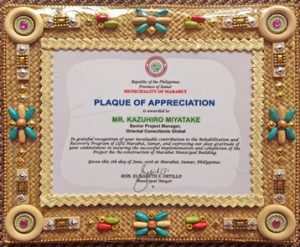